I have created a working skeleton for a serverless rust application that uses an Amazon AWS Lambda function with an AWS API Gateway that was configured using Terraform. If you enter values for a, b, and c below and click on the submit button then your values will be sent to the AWS API Gateway and forwarded on to the rust lambda function. Here the payload is examined and the query data in the form of key:value are displayed on a new tab in your web browser.

This short project took less than two days to get going and the code is shown here.

I have upgraded two applications to high performant rust code. Because of the design of the rust language, many applications are faster "out of the box" after implementation in rust. The two test cases that I have worked with are:

The two case studies will be outlined below:

The Rapidly rotating Neutron Star code is approximately 3000 lines of C code. I manually converted each line of C code to rust code ensuring that the resulting calculations achieved the same numerical result. See my Github repository for my copy of the RNS C code and the RNS rust code.

Some motivations for updating this code-base are:

The RNS code was converted function by function, line by line, and variable by variable. No effort was taken to analyse the code and refactor to increase performance. The algorithms in this code are complex, they describe the space-time curvature and matter/energy density of rotating neutron stars according to Einstein's general relativity and stellar astrophysics.

The primary goal was to get a fully working codebase in rust in the shortest possible timeframe. Additionally, I kept the number of crates (libraries) as small as possible and used standard rust as much as possible. The resulting code used the nd_array crate for two-dimensional matrices and three-dimensional tensors and the csv crate for reading in the equation of state file. Two other crates were used for testing float values. Additional code was added to allow contour plots of the resulting data and used the plotly crate. Rust datatypes were chosen to either be as close as possible to the C variable, or selected to make implementation easier. Variable names were kept the same, except for case changes to follow the rust naming conventions. After completing the conversion, I ran flamegraph, a profiling tool, to see where the code was using the most CPU resources and implemented a simple change to speed up the rust program even more.

After fixing a few minor bugs, mostly associated with off-by-one errors in indices, the rust code ran almost immediately - achieving a less than 1e-11 fractional error in values when compared to the original C code! The amount of debugging was minimal, as each function was tested as it was written. What was surprising and not expected, was that the rust code ran about twice as fast as the C code! I haven't explored why this is the case, but it was a very interesting result.

The following two videos show the execution of the C code compared to the rust code:

This is the original C code, execution time=2.35s

This is the updated rust code, execution time=1.18s

Here are some contour plots that have been generated in rust using the plotly crate. The plots are generated as html images which have been converted to png format. 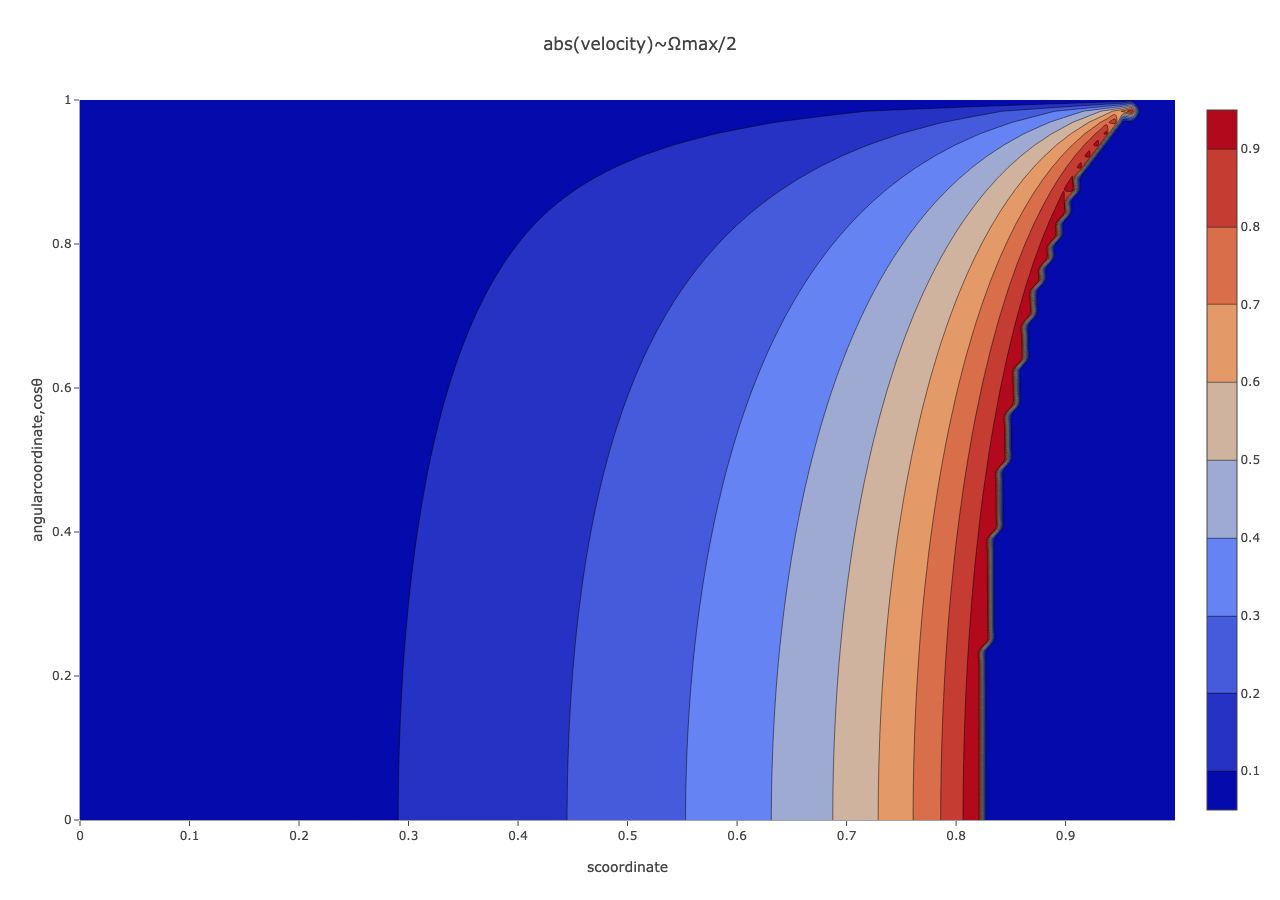 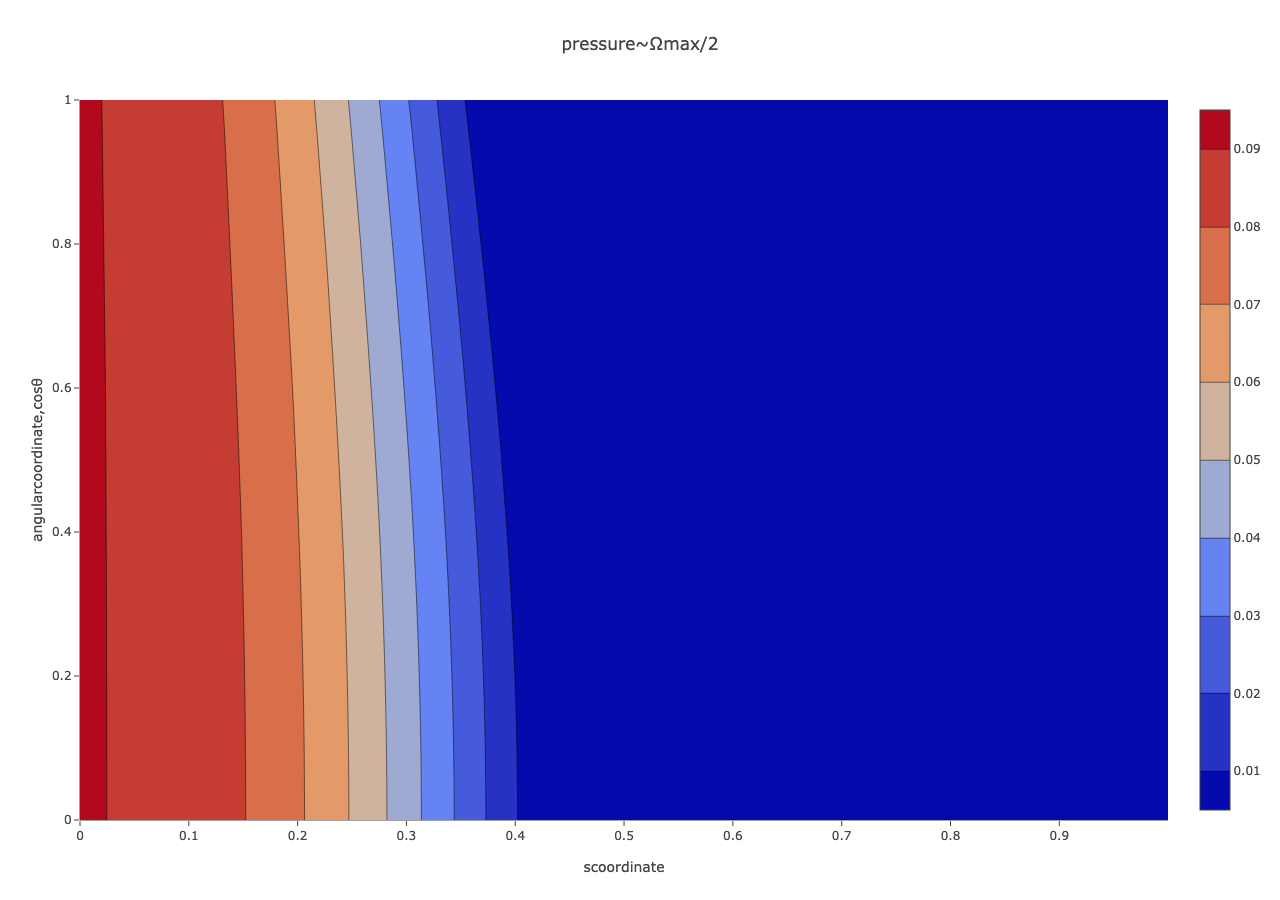 Overall, the rust conversion of the C program is at a point where I can compare the results. Eventually, I will write some python wrappers over the rust code so that it can be called from within python. This makes it much more useful to the astrophysics community in general.

This case study reads in binary data that has been written to an SD card by a BMC CPAP machine and parses the binary data and generates a csv output file. The original python code was cloned from github:headrotor/BMC_RESmart and my clone is here. I wished to port this code to rust to see firsthand how much faster it was and to investigate the difficulty level involved in porting python to rust. As this was a much smaller project, around 300 lines of code, I did not include unit tests as I did with the RNS port.

In this instance, the python code takes 35 seconds and the rust code takes 1.9 seconds. That is a speedup of around 18x.

Another unintended benefit of using rust was that the csv generated by rust had eight extra lines (python csv = 481944 lines, rust csv = 481952 lines). There is a bug in the python code where a line is dropped for each read of the binary data file. Because of the memory safety, strict type checking, and compiler enforcement, the rust code did not have this bug. So the rust code is faster and safer than the python code. It should be noted that the python code was written as service to the CPAP community and there was no guarantee on the correctness of the results. Therefore, it was likely that it was not rigorously tested for correctness. On the other hand, the rust code was not rigorously tested either, what is seen here is what was developed out of the box.